Midweek in the Premier League rounds between Arsenal-Brighton on Thursday is expected to be a fun and tough game.

The betting tips from Bettingtipsnigeria.com is Arsenal Asian -1. 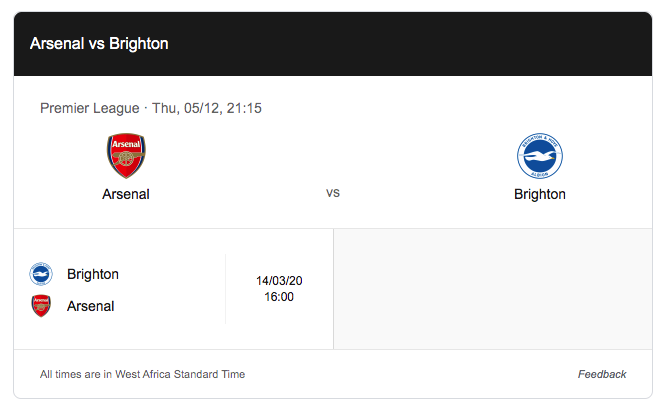 This season is really up and down for Arsenal. It has really looked miserable at times. And there are still big problems in the club with outgoing contracts, an unbalanced squad and an economy suffering from the CL shortage. Maybe the new coach Fredrik Ljungberg will be able to change a few things?

The effort in the away game against Norwich on Sunday was one of the best games of the season. The first 30 minutes were very good with Arsenal deserved to lead. However, Norwich managed to take the lead in one of their first attacks when Pucci’s shot was headed into the goal by miserable Mustafi. Arsenal acknowledged but got a new blow when Cantwell put in 2-1 with the first half’s last kick. Incredibly heavy for a low-confidence Arsenal not to receive a payout on the game and a lead to play on. Very likely they had won by then. The second half was not good at all, but overall it looked better than under the previous coach Emery. The players at least looked inspired.

On Thursday Ljungberg makes his first home game. The fans are still positive about him as he is a club icon and will stand behind the team. The atmosphere of the Emirates is certainly nothing to brag about, but at least it will not be the predestined mood it was during Emery’s last month – when the crowd became a burden and many times turned to the team.

All this should make Arsenal get a little more out of their players and then the squad should be top six in this league. Usually strong at home against this type of resistance.

Brighton actually fits Arsenal just as well. Arsenal has no direct base game or effective possession game, they are the sharpest when the individually skilled offensive players have to adjust with some surfaces to work with. Then Lacazette, Aubameyang, Özil and maybe Pepe are the best. You should get this. Potter has done a good job with Brighton but we should not forget that it was one of the lowest-ranked teams for the season. Is in place 16 in the regular table for this season and it is probably somewhere where they end up we think – place 12-17.

After all, we believe Arsenal will get a win that is so much needed. Many Nigerians are cheering for Arsenal and there are many good reasons for it! For example, Arsenal have has many great players from Nigerian and Africa. We believe a late goal with the end result 3-1 to Arsenal. With the Arsenal Asian -1 you will also win if Arsenal wins 2-0 which is also a high chance. Good luck!